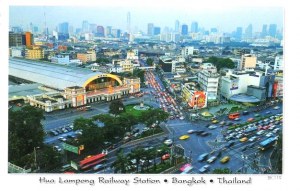 A postcard from Bangkok (Nink)

Hua Lamphong Railway Station, officially known as the Bangkok Railway Station in English, is the main railway station in Bangkok, Thailand. It is located in the center of the city in Pathum Wan District, and is operated by the State Railway of Thailand. trictly speaking, Hua Lamphong is the common name that is mainly used only in urban area of Thailand. Official name on the State Railway of Thailand is Krungthep Station.Krungthep is the common way of calling Bangkok in Thai language.