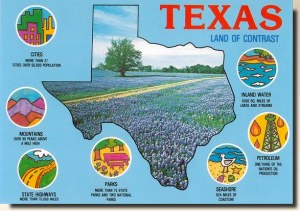 Corpus Christi is a coastal city in the South Texas region of the U.S. state of Texas. The county seat of Nueces County, it also extends into Aransas, Kleberg, and San Patricio counties. The MSA population in 2008 was 416, 376. The population was 277,454 at the 2000 census; in 2006 the US Census Bureau estimated the city's population at 285,175, making it the eighth-largest city in the state. It is the principal city of the three-county Corpus Christi Metropolitan Statistical Area as well as the larger Corpus Christi-Kingsville Combined Statistical Area. The translation from Latin of the city's name is Body of Christ, given to the settlement by the Spanish, in honor of the Blessed Sacrament (Eucharist). The city has been nicknamed The Sparkling City by the Sea, particularly in literature promoting tourism .