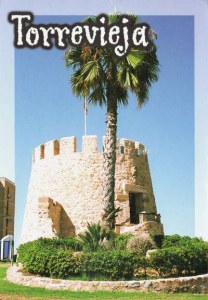 A postcard from Torrevieja (Lucy)

A postcard sended from Spain by an English girl with a swiss stamp!

Torrevieja is a seaside city and municipality located on theCosta Blanca in the province of Alicante, in south-eastern Spain. Torrevieja lies about 30 miles south of the city of Alicante. Torrevieja was originally a salt-mining and fishing village as it is located between the sea and two large salt lakes (Las Salinas), which give Torrevieja a healthymicro climate.