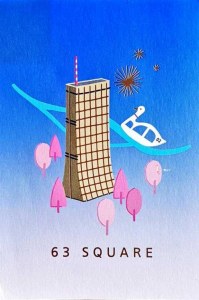 A postcard from Seoul

About this postcard
The 63 Building (Korean: 63빌딩), officially called 63 SQUARE, is a skyscraper on Yeouido island, overlooking the Han River in Seoul, South Korea. It was designed by Harry D Som and Helen W Som, principals of Som and Associates of San Francisco. (The building has been falsely attributed to the SOM design firm, which is inaccurate. At 249 meters (817 ft) high, it was the tallest building outside North America when it opened in July 27, 1985, and remains the tallest gold-clad structure in the world. It stood as South Korea's tallest building until the Hyperion Tower surpassed it in 2003, but remained the country's tallest commercial building until the Northeast Asia Trade Tower was topped-out in 2009. Lotte World Tower in 2017 became Korea's tallest skyscraper.