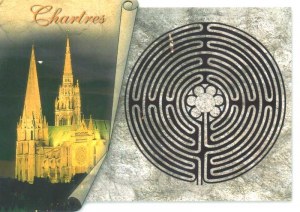 A postcard from Chartres (Frédéric)

About this postcard
Chartres Cathedral, also known as the Cathedral of Our Lady of Chartres (French: Cathédrale Notre-Dame de Chartres), is a Roman Catholic church in Chartres, France, about 80 km (50 miles) southwest of Paris, and is the seat of the Bishop of Chartres. Mostly constructed between 1194 and 1220, it stands at the site of at least five cathedrals that have occupied the site since the Diocese of Chartres was formed as an episcopal see in the 4th century. The labyrinth (early 1200s) is a famous feature of the cathedral, located on the floor in the center of the nave. Labyrinths were found in almost all Gothic cathedrals, though most were later removed since they distracted from the religious services in the nave. They symbolized the long winding path towards salvation. Unlike mazes, there was only a single path that could be followed. On certain days the chairs of the nave are removed so that visiting pilgrims can follow the labyrinth. Copies of the Chartres labyrinth are found at other churches and cathedrals, including Grace Cathedral, San Francisco. Artist Kent Bellows depicts a direct reference to the labyrinth, which he renders in the background of at least one of his artworks; Mandala, 1990, Pencil on paper, 18 x 19 1/2 in.