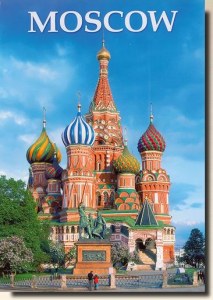 A set of postcards from Moscow (Elvira 3/5)

Moscow is situated on the banks of the Moskva River, which flows for just over 500 km through the East European Plain in central Russia. 49 bridges span the river and its canals within the city's limits. Elevation of Moscow in VVC, where situated head Moscow weather station, is 156 m (512 ft). The highest point is Teplostanskaya highland with 255 m (837 ft). Width of Moscow city (not limiting MKAD) from west to east is 39.7 km (24.7 mi), length from north to south ÃƒÂ¢Ã¢â€šÂ¬Ã¢â‚¬Å“ 51.7 km (32.1 mi). Moscow's road system is centered roughly around the Kremlin at the heart of the city. From there, roads generally radiate outwards to intersect with a sequence of circular roads (ÃƒÂ¢Ã¢â€šÂ¬Ã…â€œringsÃƒÂ¢Ã¢â€šÂ¬Ã‚Â) [wikipedia].