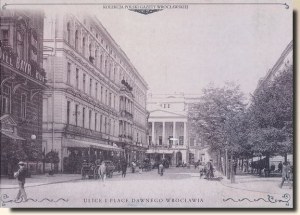 A postcard from Wroclaw (Joanna)

Wroc?aw is the chief city of the historical region of Silesia in south-western Poland, situated on the River Oder. Over the centuries the city has been part of Poland, Bohemia, Austria, Prussia and Germany. Wroc?aw is the capital of the Lower Silesian Voivodeship. According to official population figures for June 2009, its population is 632,240, making it the fourth largest city in Poland [wikipedia].