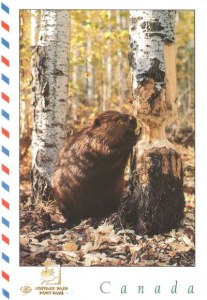 A postcard from Ridgetown (Carole and Sierra)

The North American beaver (Castor canadensis) is one of the two beaver species. It is found in the Americas, native to North Americaand introduced to South America. In the United States and Canada, where no other species of beaver occurs, it is usually simply referred to as "beaver". Its other vernacular names, including American beaver and Canadian beaver, distinguish this species from the one other extant beaver, Castor fiber, native to Eurasia. ("Canadian beaver" also refers to the subspecies Castor canadensis canadensis.)