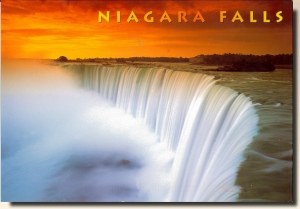 The Niagara Falls are voluminous waterfalls on the Niagara River, straddling the international border between the Canadian province of Ontario and the U.S. state of New York. Niagara Falls is composed of two major sections separated by Goat Island: Horseshoe Falls, the majority of which lies on the Canadian side of the border, and American Falls on the American side. The smaller Bridal Veil Falls are also located on the American side, separated from the main falls by Luna Island