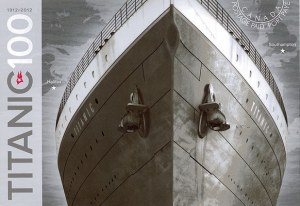 The construction of Titanic and Olympic took place virtually in parallel, with Olympic's hull laid down first on 16 December 1908 and Titanic's on 31 March 1909. Both ships took about 26 months to build and followed much the same construction process. They were designed essentially as an enormous floating box girder, with the keel acting as a backbone and the frames of the hull forming the ribs. At the base of the ships, a double bottom 5 feet 3 inches (1.60 m) deep supported 300 frames, each between 24 inches (61 cm) and 36 inches (91 cm) apart and measuring up to about 66 feet (20 m) long. They terminated at the bridge deck (B Deck) and were covered with steel plates which formed the outer skin of the ships.