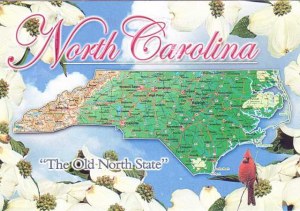 A postcard from Raleigh, NC (Alexandra)

About this postcard
North Carolina is a state located in the southeastern region of the United States. North Carolina is the 28th largest and 9th-most populous of the 50 United States. It is bordered by Virginia to the north, the Atlantic Ocean to the east, Georgia and South Carolina to the south, and Tennessee to the west. Raleigh is the state's capital and Charlotte is its largest city. The Raleigh metropolitan area is the second-largest metropolitan area in the state, with an estimated population of 1,362,540 in 2018, and is home to the largest research park in the United States, Research Triangle Park.