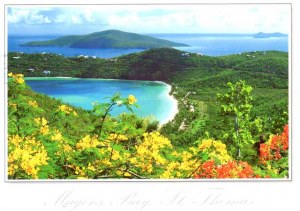 A postcard from Raleigh, NC (Alexandra)

About this postcard
Magens Bay is a bay in the Northside region on Saint Thomas, United States Virgin Islands, located in the Caribbean. Located on the North (Atlantic) side of the island, Magens Bay features a well-protected white sand beach stretching for nearly three quarters of a mile. It is one of the most popular tourist destinations on the island, as well as a gathering place for locals. The beach sits at the head of a deep bay, the arms of which are Peterborg peninsula to the east and Tropaco Point to the west. The bay's northwest exposure means its waters are usually calm, although storms in the North Atlantic can occasionally generate large waves in the winter months. The sandy bottom means snorkeling is of limited interest, although turtles, conch, tarpon and other fish are commonly spotted. Local fishing boats anchor in the eastern part of the bay.