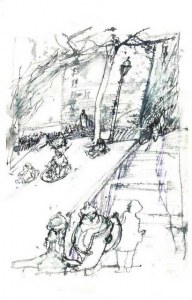 A postcard from Syracuse, NY (Jennifer)

About this postcard
VERONICA LAWLOR‘s romantically inclined reportage drawings have led her around the world, including a reportage of Italy and portrait of Pope John Paul II. On this side of the Atlantic she has travelled across the United States drawing icons of America for Brooks Brothers 185th anniversary campaign, and has completed reportage assignments for numerous clients including 3M Corporation and the Hyatt hotel chain. In 2002 she documented VaxGen’s quest to create an AIDS vaccine for the companies annual report. The only artist to draw, on the spot, the 9/11 attacks on the World Trade Center, her work is featured in the Newseum, the Washington DC museum of journalism; the drawings were also exhibited at Montserrat College and the New York City Fire Museum. The full series is published in a book titled, September 11, 2001: Words and Pictures.