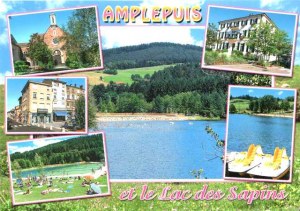 A postcard from Amplepuis (Claudia)

About this postcard
Lac des Sapins, literally translated into English as 'the lake of the fir-trees', is an artificial lake located in the region of Rhône-Alpes. It is situated 65 km northwest of the city of Lyon. Construction of the lake began in the summer of 1967 by Louis Gueydon. The lake was built to try to develop the tourist industry in the region after the decline in industry in rural areas. The 1983 a camping park next to the lake was built with chalets, caravans etc. The investment proved to be successful and in 1990 the camping park was extended, the chalets and caravans upgraded or renovated. There were also multiple sports activities proposed (mountain biking, wind-surfing, volleyball and acrobranching)