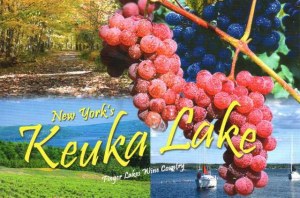 A postcard from Syracus, NY (Julie)

About this postcard
Keuka Lake is one of the major Finger Lakes in the U.S. state of New York. It is unusual because it is Y-shaped, in contrast to the long and narrow shape of the other Finger Lakes. Because of its shape, it was referred to in the past as Crooked Lake. Keuka means "canoe landing" in the Iroquois language and "lake with an elbow" in the Seneca language.