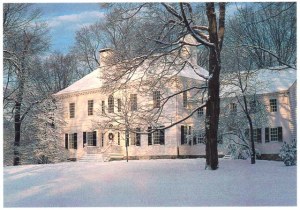 A postcard from Chatham, NJ (Jerry)

About this postcard
The Ford Mansion is a classic 18th-century American home built by Jacob Ford, Jr. in 1774 and now owned by the National Park Service as a part of the Morristown National Historical Park. It was acquired by the Washington Association of New Jersey in 1873. The Georgian-styled mansion is known for being George Washington's headquarters from December 1779 to June 1780 during the American Revolutionary War. The mansion is located in Morristown, New Jersey.