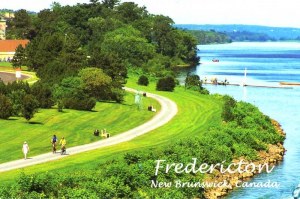 A postcard from Fredericton (Stephanie)

About this postcard
Fredericton is the capital city of the Canadian province of New Brunswick. The city is situated in the west-central portion of the province along the Saint John River, which flows west to east as it bisects the city. The river is the dominant natural feature of the area. An important cultural, artistic, and educational centre for the province, Fredericton is home to two universities, the New Brunswick College of Craft and Design, and cultural institutions such as the Beaverbrook Art Gallery, the Fredericton Region Museum, and The Playhouse, a performing arts venue. The city hosts the annual Harvest Jazz & Blues Festival, attracting regional and international jazz, blues, rock, and world artists. Fredericton is also an important and vibrant centre point for the region's top visual artists; many of New Brunswick's notable artists live and work there today. Fredericton has also been home to some great historical Canadian painters as well, including Goodridge Roberts, and Molly and Bruno Bobak.