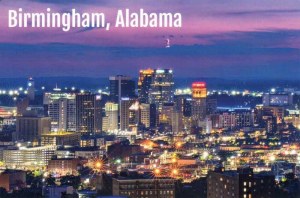 A postcard from Birmingham, AL (Peter)

About this postcard
Birmingham was founded on June 1, 1871, by the Elyton Land Company whose investors included cotton planters, bankers and railroad entrepreneurs. It sold lots near the planned crossing of the Alabama & Chattanooga and South & North Alabama railroads including land formerly a part of the Benjamin P. Worthington Plantation. The first business at that crossroads was the trading post and country store operated by Marre & Allen. The site of the railroad crossing was notable for the nearby deposits of iron ore, coal, and limestone – the three main raw materials used in making steel. Birmingham is the only place worldwide where significant amounts of all three minerals can be found in close proximity.From the start the new city was planned as a great center of industry. The founders, organized as the Elyton Land Company, borrowed the name of Birmingham, one of England's main industrial cities, to advertise that point. The growth of the planned city was impeded by an outbreak of cholera and a Wall Street crash in 1873. However, it began to develop shortly afterward at an explosive rate.