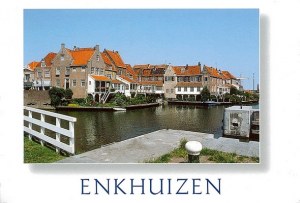 A postcard from Enkhuizen

Enkhuizen was one of the harbour-towns of the VOC, just like Hoorn and Amsterdam, from where overseas trade with the East Indies was conducted. It received city rights in 1355. In the mid-17th century, Enkhuizen was at the peak of its power and was one of the most important harbour cities in the Netherlands. However, due to a variety of reasons, notably the silting up of the harbours, Enkhuizen lost its position to Amsterdam.