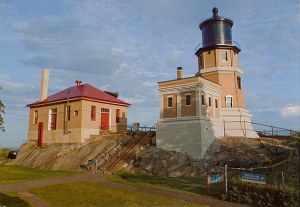 A postcard from Duluth (Janice)

Split Rock Lighthouse is a lighthouse located southwest of Silver Bay, Minnesota, USA on the North Shore of Lake Superior. The structure was designed by lighthouse engineer Ralph Russell Tinkham and was completed in 1910 by the United States Lighthouse Service at a cost of $75,000, including the buildings and the land. It was built in response to the loss of ships during the famousMataafa Storm of 1905, in which 29 ships were lost on Lake Superior. One of these shipwrecks, the Madeira, is located just north of the lighthouse. The light was first lit on July 31, 1910.