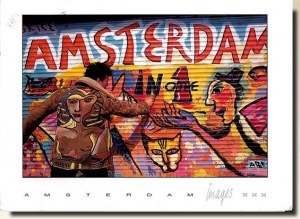 Fabrice Hund (1961) studied at the Rijksakademie van Beeldende Kunsten in Amsterdam from 1980-1985. He completed the work period succesfully. In 1990 Fabrice started to make colorfull wallpaintings in Amsterdam, especially in De Pijp area. Later he realised bigger projects throughout Amsterdam like "De Bogen" near Central Station ( unfortunately vanished on this moment)and in a passageway in Muiderpoortstation, which is partly still to be seen, when entering the bikeshop. Although painting and drawing takes the largest place in the work of Fabrice, since many years he also has been able to master the technic of mosaic. Examples of mosaic-projects in Amsterdam are "Het Kompas" ( Marie Heinekenplein ) and " Scherven van Beschaving" Muiderpoortstation).