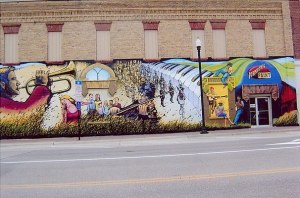 A postcard from Marshall, MN (Janice)

Marshall is a city in Lyon County, Minnesota in the United States. Marshall was founded in 1872 by the Winona & St. Peter Railroad. Lake Marshall Township had been established in the area two years earlier, and included a post office and several farms. Before that, the site was occasionally used as a campground for groups of Dakota, who hunted and traveled throughout the region. After much discussion, James J. Manton decided on Marshall in honor of GovernorWilliam R. Marshall.