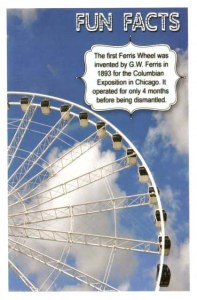 A postcard from Eastpointe, MI (Christine)

About this postcard
A Ferris wheel, named after George Washington Gale Ferris, Jr., (sometimes called a big wheel, observation wheel, or, in the case of the very tallest examples,giant wheel) is a nonbuilding structure consisting of a rotating upright wheel with multiple passenger-carrying components (commonly referred to as passenger cars, cabins, capsules, gondolas, or pods) attached to the rim in such a way that as the wheel turns, they are kept upright, usually by gravity.