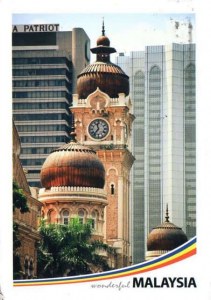 A postcard from Kuala Lumpur (Shufen)

About this postcard
The Sultan Abdul Samad Building is located in front of the Dataran Merdeka (Independence Square) and the Royal Selangor Club, by Jalan Raja in Kuala Lumpur, Malaysia. The structure takes its name from Sultan Abdul Samad, the reigning sultan of Selangor at the time when construction began. It was designed by A.C. Norman and built in 1894-1897 to house several important government departments during the British administration. A.C. Norman spent time in Africa and saw Muslim mosques in India which led him to use Mughal architecture in the building's design.The 41-meter tower chimed for the first time to coincide with Queen Victoria’s Jubilee Parade in 1897 and has chimed since.