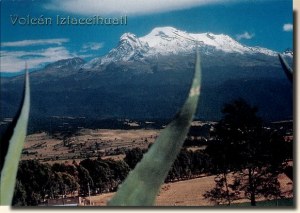 A postcard from Mexico (Fabiola)

Iztaccíhuatl (Ixtaccíhuatl), is the third highest mountain in Mexico, after the Pico de Orizaba, 5,636 m (18,491 ft), and Popocatépetl, 5,426 m (17,802 ft). Its name is Nahuatl for "White woman". The mountain has four peaks, the highest of which is 5,230 m (17,160 ft) above sea level. Together, the peaks are seen as depicting the head, chest, knees and feet of a sleeping female figure, which is visible from either the east or the west. Iztaccíhuatl is a mere 70 km (43 mi) to the southeast of Mexico City and is often visible from the capital, depending on atmospheric conditions. While the first recorded ascent was made in 1889, archaeological evidence suggests that the Aztecs and previous cultures also climbed the mountain.