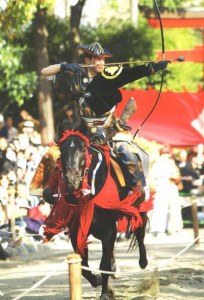 A postcard from Kitakyūshū (Akiko)

Yabusame is a type of mounted archery in traditional Japanese archery. An archer on a running horse shoots three special "turnip-headed" arrows successively at three wooden targets. This style of archery has its origins at the beginning of the Kamakura period. Minamoto no Yoritomo became alarmed at the lack of archery skills his samurai had. He organized yabusame as a form of practice.