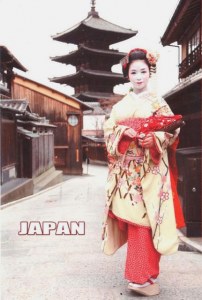 A postcard from Fukui (Leticia)

About this postcard
Geisha, geiko or geigi are traditional Japanese female entertainers who act as hostesses and whose skills include performing various Japanese arts such as classical music, dance, games and conversation, mainly to entertain male customers. Geisha like all Japanese nouns, has no distinct singular or plural variants. The word consists of two kanji, (gei) meaning "art" and (sha) meaning "person" or "doer". The most literal translation of geisha into English would be "artist," "performing artist," or "artisan." Another name for geisha is geiko, which is usually used to refer to geisha from western Japan, which includes Kyoto.