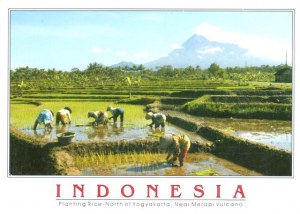 A postcard from Jakarta (Sophia)

Jakarta  officially known as the Special Capital Region of Jakarta, is the capital and largest city of Indonesia, and one of the most populous urban agglomerations in the world. ts current name is derived from the word "Jayakarta". The origins of this word lie in the Old Javanese and ultimately in the Sanskrit language. "Jayakarta" translates as "victorious deed", "complete act", or "complete victory".