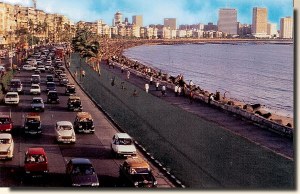 Marine Lines is an area in South Mumbai. It is also the name of a railway station on the Mumbai suburban railway on the Western Railway railway line. The name Marine Lines is named after the Marine Battalion Lines, a military establishment built by the British. The battalion was later converted to an air force residence quarters, and now lies just south of Metro Adlabs. The name Marine lines was also the name of the road, on which Bombay Hospital and Liberty Cinema stands. It is now known as V Thackersey Marg. Marine Drive is the famous promenade near the station.