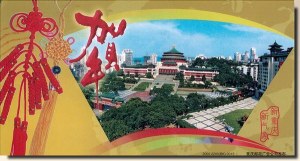 A postcard from en Chongqing (Vivian)

Chongqing is a major city in southwestern China. Administratively, it is one of the People's Republic of China's four provincial-level direct-controlled municipalities, and the only such municipality in western China. The municipality was created on 14 March 1997, succeeding the sub-provincial city administration that was part of Sichuan Province. The municipality of Chongqing has a registered population of 31,442,300 as of 2005. It has jurisdiction over 19 districts, 17 counties, and four autonomous counties. The population of the urban area of Chongqing proper was 5.09 million (2000).