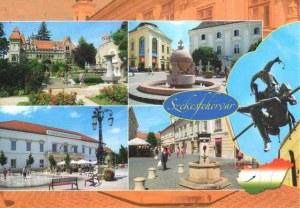 A postcard from Székesfehérvár (Orsi)

About this postcard
The city of Székesfehérvár, located in central Hungary, is the 9th largest city of the country. Székesfehérvár was the capital of Hungary in the Middle Ages. Now the city is regional capital of Central Transdanubia, the centre of Fejér county and Székesfehérvár District. It was one of the most important cities of Hungary. In the Székesfehérvár Basilica (one of the largest basilicas in medieval-Europe), where the Diets were held and the crown jewels kept, thirty-seven kings and thirty-nine queens consort were crowned and fifteen rulers buried.