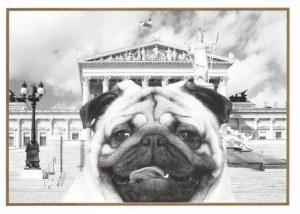 A postcard from Wien

About this postcard
The Austrian Parliament Building in Vienna is where the two houses of the Austrian Parliament conduct their sessions. The building is located on the Ringstraße boulevard in the first district Innere Stadt, near Hofburg Palace and the Palace of Justice. It was built to house the two chambers of the Imperial Council (Reichsrat), the bicameral legislature of the Cisleithanian (Austrian) part of the Austro-Hungarian Empire. Since its construction, the Parliament Building has been the seat of these two houses, and their successors—the National Council (Nationalrat) and the Federal Council (Bundesrat)—of the Austrian legislature.