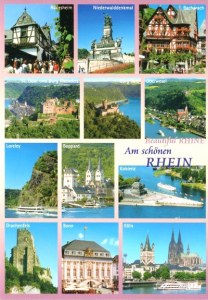 A postcard from Kaiserslautern (Anne)

The Rhine is a European river that begins in the Swiss canton of Grisons in the southeastern Swiss Alps, forms the Franco-German border, then flows through Germany and eventually empties into the North Sea in the Netherlands.The Rhine and the Danube formed most of the northern inland frontier of the Roman Empire and, since those days, the Rhine has been a vital and navigable waterway carrying trade and goods deep inland. It has also served as a defensive feature and has been the basis for regional and international borders. The many castles and prehistoric fortifications along the Rhine testify to its importance as a waterway.