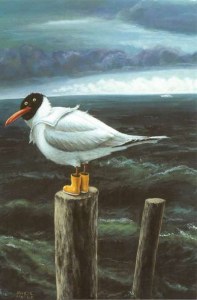 A postcard from Dresde (Luisa)

Rudi Hurzlmeier is a German cartoonist from Munich who has been active since the early 1980s. He works for satire and television magazines like Titanic, Hör Zu, Penthouse. He also works for television. As an illustrator, he cooperates with Wiglaf Droste, Hans Zippert, Fritz Eckenga and Harry Rowolt, among others. He has published over 30 books, among which 'Fernsehen', published by Edition Moderne. Since the 1990s, he is also active as a painter, using the signature RuDiHu.