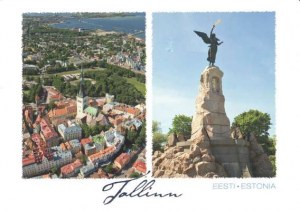 A postcard of Tallinn from Belgium (Krista)

Tallinn is the capital and largest city of Estonia. Tallinn's Old Town is in the list of UNESCO World Heritage Sites. It is ranked as a global city and has been listed among the top 10 digital cities in the world. Tallinn is the oldest capital city in Northern Europe. The city was known as Reval from the 13th century until 1917 and again during the Nazi invasion of Estonia from 1941 to 1944.