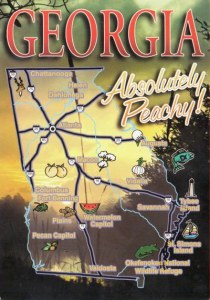 A postcard from Albany (David)

Albany is a city in and the county seat of Dougherty County, Georgia, United States, in the southwestern part of the state. The area where Albany is located was formerly inhabited by the Creek Indians, who called it Thronateeska after their word for "flint" because of the mineral flint that was found near the river. The Creeks used this flintstone to make tools and weapons such as arrowheads.