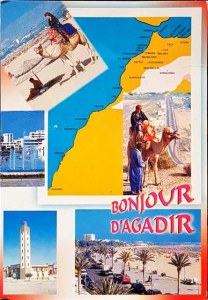 About this postcard
Agadir is one of the major urban centres of Morocco. Three languages are spoken in the city: Tashelhit (first language of the majority), Moroccan Arabic, and French. The city was destroyed by an earthquake in 1960; it has been completely rebuilt with mandatory seismic standards. It is now the largest seaside resort in Morocco, where foreign tourists and many residents are attracted by an unusually mild year-round climate. The mild winter climate (January average midday temperature 20.5 °C/69 °F)and good beaches have made it a major "winter sun" destination for northern Europeans.