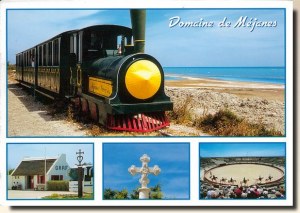 A postcard from Camargue (Chloé)

The Camargue is located south of Arles, France, between the Mediterranean Sea and the two arms of the River Rhône delta. The eastern arm is called the Grand Rhône; the western one is the Petit Rhône. Administratively it lies within the département of Bouches-du-Rhône, the appropriately named "Mouths of the Rhône". A further expanse of marshy plain, the Petite Camargue (little Camargue), just to the west of the Petit Rhône, is in the département of Gard. The area was also the inspiration for naming Operation Camargue during the First Indochina War. Camargue was designated a Ramsar site as a "Wetland of International Importance" on December 01, 1986