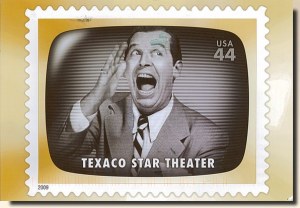 Texaco Star Theater is an American comedy-variety show, broadcast on radio from 1938 to 1949 and telecast from 1948 to 1956. It was one of the first successful examples of Americantelevision broadcasting, remembered as the show that gave Milton Berle the nickname "Mr. Television". The classic 1940–44 version of the program, hosted by radio's Fred Allen, was followed by a radio series on ABC (the former NBC Blue) in the spring of 1948. When Texaco (now Chevron Corporation) first took it to television on NBC on June 8, 1948, the show had a huge cultural impact.