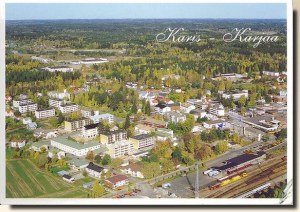 A postcard from Karis (Britta)

Karis is a former Finnish town and Finnish municipality in Finland. On January 1, 2009, it was consolidated with Ekenà¤s and Pohja that formed the new town of Raseborg. It is located in the Finnish province of Southern Finland and is part of Uusimaa, one of the regions of Finland. The municipality was bilingual, with a majority (61%) being Swedish language speakers and a minority (38%) being Finnish language speakers