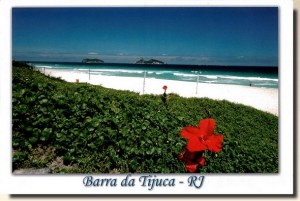 Barra da Tijuca is a famous neighborhood of Rio de Janeiro, Brazil, located southwest of the city on the Atlantic Ocean. The Barra da Tijuca is a region which includes the administrative area borough Barra da Tijuca, located between the Atlantic Ocean The massive Pedra Branca and Tijuca and Jacarepagua in West Zone of city of Rio de Janeiro, capital of namesake state. It has a total of 27.3 km of oceanic beaches being the largest Praia da Barra, which goes from the pier to the Pontal da Barra (Barra-Recreation Reserves), with 18 km in length, one of the largest state and three large ponds, And smaller ponds and canals.