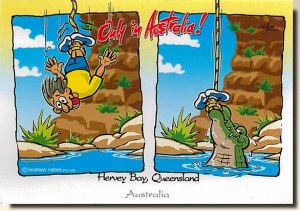 A postcard from Queensland (Yvonne)

Queensland is a state of Australia that occupies the north-eastern section of the mainland continent. It is bordered by the Northern Territory to the west, South Australia to the south-west and New South Wales to the south. To the east, Queensland is bordered by the Coral Sea and Pacific Ocean. The state is Australia's second largest by area, following Western Australia, and the country's third most populous after New South Wales and Victoria.