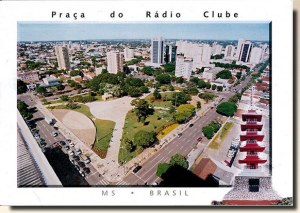 A postcard from Campo Grande (Julia)

Campo Grande (lit. Great Field) is the capital of the state of Mato Grosso do Sul in the Center-West region of Brazil. The city is nicknamed Cidade Morena ("Brown City" in Portuguese) after the reddish-brown colour of the region's soil. It has a population of 755,107, according to a 2009 IBGE estimate. The region where the city is located was in the past a waypoint for travellers who wanted to go from Sao Paulo or Minas Gerais to northern Mato Grosso by land. In the early 1900s a railway was completed connecting Campo Grande to Corumbà¡, on the Bolivian border, and to Bauru, Sà£o Paulo. Also in the beginning of the 20th century, the Western Brazilian Army Headquarters was established in Campo Grande, making it an important military center.