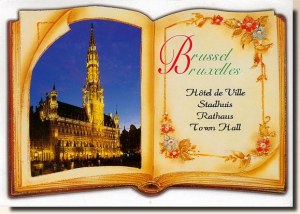 A postcard from Brussel (Raquel)

Brussels, is the de facto capital city of the European Union (EU) and the largest urban area in Belgium. It comprises 19 municipalities, including the City of Brussels proper, which is the capital of Belgium, Flanders and the French Community of Belgium. Brussels has grown from a 10th-century fortress town founded by a descendant of Charlemagne into a metropolis of more than one million inhabitants. The presence of the main EU institutions as well as the headquarters of the North Atlantic Treaty Organization (NATO) has made the city a polyglot home of many international organisations, politicians, diplomats and civil servants. Although historically Dutch-speaking, Brussels became more and more French-speaking over the 19th and 20th centuries. Today a majority of inhabitants are native French-speakers, although both languages have official status. Linguistic tensions remain, and the language laws of the municipalities surrounding Brussels are an issue of much controversy in Belgium.