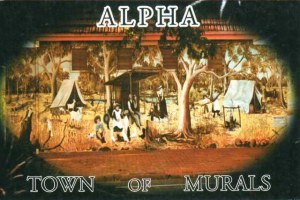 About this postcard
Alpha is a rural town in the Barcaldine Region in Central West Queensland, Australia. Alpha was initially established as a temporary terminus during construction of the Great Northern Railway. The railway, which was being built westwards from Rockhampton, was opened to Alpha on 22 September 1884. The construction camp continued moving west, but a township remained at the former terminus. Until the late 1990s, Queensland Rail maintained a locomotive depot in the town.