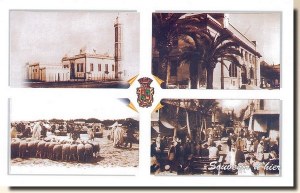 A postcard from Sidi-Bel-Abbés (Amine)

Sidi Bel Abbès is a capital of the Sidi Bel Abbès wilaya, Algeria. It is named after a Muslim holy man who is buried there. It is the commercial center of an important area of vineyards, market gardens, orchards, and grain fields. It is surrounded by a wall with four gates and there is a university there. Sidi Bel Abbès is 75 kilometers from the Mediterranean Sea. It is well connected to other Algerian cities by roads and railroads. Oran is 70 kilometers north and Tlemcen is 90 kilometers west of Sidi Bel Abbès. The closest airport is in Oran [wikipedia].