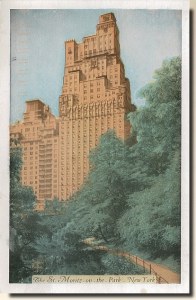 A postcard from Vancouver, WA (Sherri)

The ST.MORITZ Hotel with 1000 rooms, rise majestically above beautiful Central Park. It has an international reputation as "new York's Only Truly Confinental Hotel". 50 Central Park South, Newyork. Vancouver is a city on the north bank of the Columbia River in the U.S. state of Washington and the county seat of Clark County. According to the Washington State Office of Financial Management's estimate in April of 2008, the city has a population of 162,400, making it the fourth largest city in the state. It is part of the Portland-Vancouver metropolitan area, which is the 23rd largest metropolitan area in the United States with over 2 millin residents. [wikipedia].