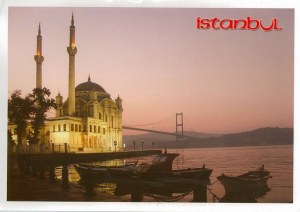 A postcard from Istambul (Arzu Sert)

Ortaköy Mosque (Turkish: Ortaköy Camii), officially the Büyük Mecidiye Camii (Grand Imperial Mosque) of Sultan Abdülmecid) in Be?ikta?, Istanbul,Turkey, is situated at the waterside of the Ortaköy pier square, one of the most popular locations on the Bosphorus. The original Ortaköy Mosque was built in the 18th century. The current mosque, which was erected in its place, was ordered by the Ottoman sultanAbdülmecid and built between 1854 and 1856. Its architects were father and son Garabet Amira Balyan and Nigo?ayos Balyan (who also designed the nearby Dolmabahçe Palace), who designed it in Neo-Baroque style. Within the mosque hang several examples of Islamic calligraphy executed by the Sultan Abdülmecid himself, who was also a hattat (master calligrapher).