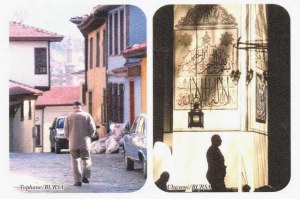 A postcard from Bursa (Behran)

About this postcard
Bursa is a large city in Turkey, located in northwestern Anatolia, within the Marmara Region. It is the fourth most populous city in Turkey and one of the most industrialized metropolitan centres in the country. Ursa was the first major and second overall capital of the Ottoman State between 1335 and 1363. The city was referred to as Hüdavendigar ('God's gift') during the Ottoman period, while a more recent nickname is Yeşil Bursa 'Green Bursa' in reference to the parks and gardens located across its urban fabric, as well as to the vast and richly varied forests of the surrounding region.