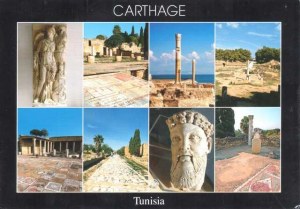 A postcard from Carthage (Madhi)

About this postcard
Carthage is a commune in Tunis Governorate, Tunisia. It is named for, and includes in its area, the archaeological site of Carthage. Roman Carthage was destroyed following the Muslim invasion of 698, and it remained undeveloped for more than a thousand years (being replaced in the function of regional capital by the medina of Tunis under Arab and later Ottoman rule), until the establishment of the French protectorate of Tunisia in 1881.